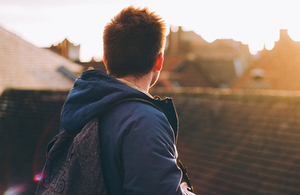 The Ministry of Housing, Communities and Local Government (MHCLG) recently published the first Rough Sleeping Initiative (RSI) impact evaluation – which provides good evidence that the RSI is having a positive impact in reducing the number of people sleeping on the streets of England.

This evaluation is the latest evaluation in the MHCLG Homelessness & Rough Sleeping Research and Evaluation programme to build up an evidence base on ‘what works’ to reduce homelessness and rough sleeping.

For those of you who do not know, the RSI was launched in March 2018 and was targeted at local authorities with the highest numbers of people sleeping rough.

£30m was allocated to 83 local authorities, as well as a specialist team of rough sleeping and homelessness advisers drawn from experts in local authorities and the third sector. This was the first year of funding to make an immediate impact in providing and boosting the support available to individuals sleeping rough.

In its first year, the RSI provided over 1,750 new bed spaces and 500 staff. The initiative is part of the government’s Rough Sleeping Strategy, which sets out the vision for halving rough sleeping by 2022 and ending it altogether by 2027.

While there is still lots of work to do to end rough sleeping, this evaluation provides good evidence that MHCLG’s work is starting to have a positive impact in reducing rough sleeping numbers.

RT mhclg: The number of people sleeping rough on the streets has dropped significantly in areas where the government's Rough Sleeping Initiative has been introduced. Communities Secretary RobertJenrick explains more: pic.twitter.com/CqjKZxtX48

In an ideal world we would only compare identical areas that were the same in every aspect – but this was not possible. So instead we controlled for several key factors that evidence suggested could influence levels of rough sleeping, such as weather patterns, changes in the way areas chose to measure rough sleeping, previous trends in rough sleeping, and local housing and labour market conditions.

What did we find?

This is equivalent to an estimated net reduction of 1,321 people who would have been recorded as sleeping rough in the 2018 annual snapshot in RSI areas had the initiative not been in place.

The graph below shows the estimated impact of the RSI on the numbers of people sleeping rough in 2018. 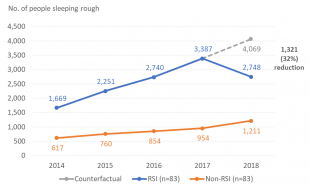 Our analysis found that RSI areas changing their approach to measuring rough sleeping from evidence-based estimates to actual street counts and vice versa, did not account for the fall in rough sleeping seen in these areas.

We also found that the weather on the night of, and leading up to, the annual snapshot, did not have any impact on the number of people sleeping rough. This suggests areas are following guidance to include individuals, who take up emergency accommodation as part of Severe Weather Emergency Protocol (SWEP), in the official snapshot rough sleeping statistics.

How do we know the findings are reliable?

Bryson Purdon Social Research, specialists in impact evaluation, independently peer reviewed the work by MHCLG analysts, which ensured the work was high quality and had a sound methodology.

Homeless Link, the national membership charity for organisations working directly with people who become homeless in England, independently verify the official annual rough sleeping statistics. They oversee the whole process and issue clear guidance on how to conduct a count and where it may be appropriate to move from a count to an estimate, or vice versa.  Hundreds of local partners and voluntary sector organisations actively engage in the single night snapshot that takes place annually, which gives us confidence in the reliability of the statistics. The methodology used in England aligns with the approach which is now standard in many parts of the world including Canada, the United States and several other European countries including France, Ireland, Italy and Spain.

A further £46m fund for 2019/20 (£12m of which is reserved for authorities not funded in the first year) has been allocated to build upon support and further help reduce rough sleeping.

We will also be publishing a process evaluation of the RSI in the autumn, sharing learning about how the RSI has worked, good practice and key challenges, including primary research with local authorities and other key delivery partners. We will let you know as soon as we do!

If you are interested in finding out more about the RSI evaluation, or the broader programme of Homelessness and Rough Sleeping research and evaluation , please get in touch via our Homelessness and Troubled Families Analysts email address. We look forward to hearing from you.

A version of this blog was recently published by Pro Bono Economics.